Like a lot of people, I have not been great at cleaning up my old git branches over time. Sometimes they get merged but I don't delete them. (The "delete branch after merge" option in GitLab and GitHub help, but they're not 100%). Sometimes I forget I even had a branch, because I never filed a pull request. Also, with all those already-merged branches lying around, it's easy to overlook the not-even-requested branches, especially if I haven't touched them in a while.

The problem is that when you (or I, in this case!) work on a team with other people, they routinely fetch from your remote, and you're effectively cluttering up their clone with a bunch of dead branches. Sure, they can just ignore it, but it's just a little rude. Or, at least, it would be nicer to keep things tidier.

Around a year ago, I wrote a tool to help me clean up (and track) my branches in the primary Fastmail repository. It's got two parts: git-work-status and git-scrub-branches.

git-scrub-branches tries to detect branches that can be destroyed, by doing this, more or less:

…and then running git-work-status to show where I ended up.

I have a lot of branches in my work code, so here's the program running on a repo where I have fewer, the perl5.git repo: 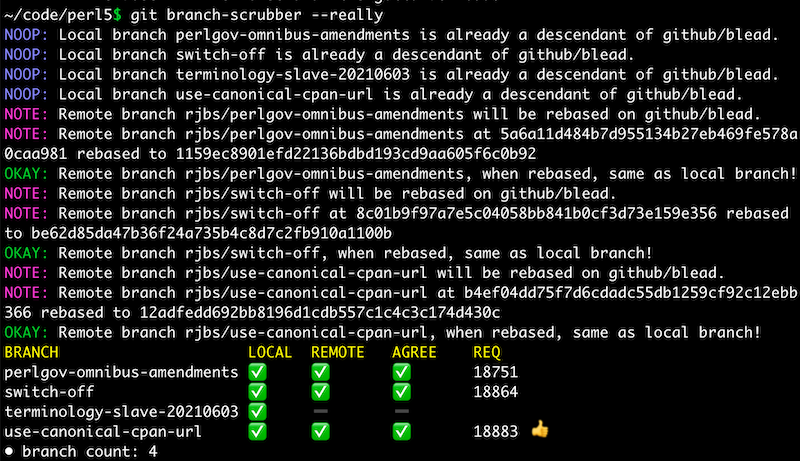 The existence of this screenshot might alert you to the fact that I've now made the tool work on perl5.git. In fact, it should work on any GitHub or GitLab repository, but if you want to you it, you'll have to set up some configuration in your .git/config something like this:

Really, though, you should read the source code to make it go. This is definitely not code I'm looking to maintain as a public utility, but I did put put the code online, so feel free. I expect I'll keep messing around with it over time, without concern for anybody's use case but my own.

Finally, I should note that it's a bit of a double-edged sword, on that whole rudeness front. On one hand, it really does help keep your branches nice and tidy. I've used this to clean up literally hundreds of dead branches. On the other hand, GitLab pretty eagerly subscribers people to update notifications, and those notifications include "Rik just rebased his two-year-old branch for the 15th time." This can be annoying, but I'd rather receive those emails and know that branches were cleaned up. Also, I don't think GitHub sends them — let me know if I'm wrong!